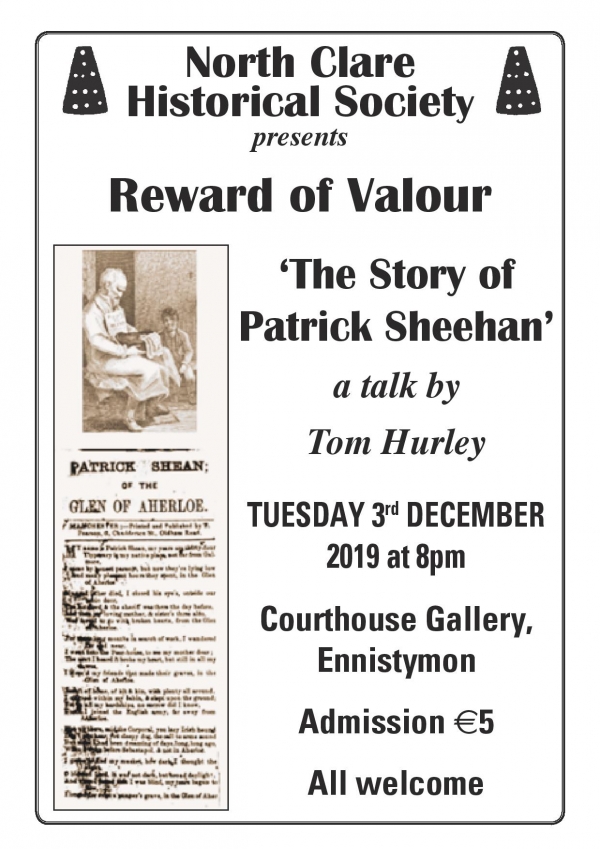 When the Crimean War ended in 1856, Patrick Sheehan returned blind after fighting
with the British army. He would subsequently serve a prison term having been
arrested for begging when the nine-month army service pension he had been
granted expired. A Tipperary man, outraged by his shameful treatment, wrote a
ballad, The Glen Of Aherlow aimed at discouraging other Irishmen from enlisting in
the British army and suffering a similar fate. Sheehan remains immortalised through
this ballad today. The talk will shed light on the story of Patrick Sheehan, the
Crimean War and the ballad. Included will be details of Sheehans enlistment,
Crimean War involvement, circumstances of his blindness, story of his arrest and the
truth of whether his pension was ever restored by the British government. The talk
will also investigate his death and access how accurate the song's lyrics are
pertaining to the details of his life. Details of locations and landmarks connected with
his story will also be incorporated. The Clare Connection will be revealed.

Tom Hurley is a documentary maker who hails from West Cork. He has a keen
interest in history and enjoys conducting research into what could be termed
‘neglected incidents’ from our country’s past. His work has featured in both the local
and national media.

back to top
More in this category: Free Talk on Health & Yoga Clare Surnames and Sources - NCHS talk with Lorna Moloney