Mapping the archive: The personal papers of Commandant Joe Barrett (1888-1971) by Paul O’Brien 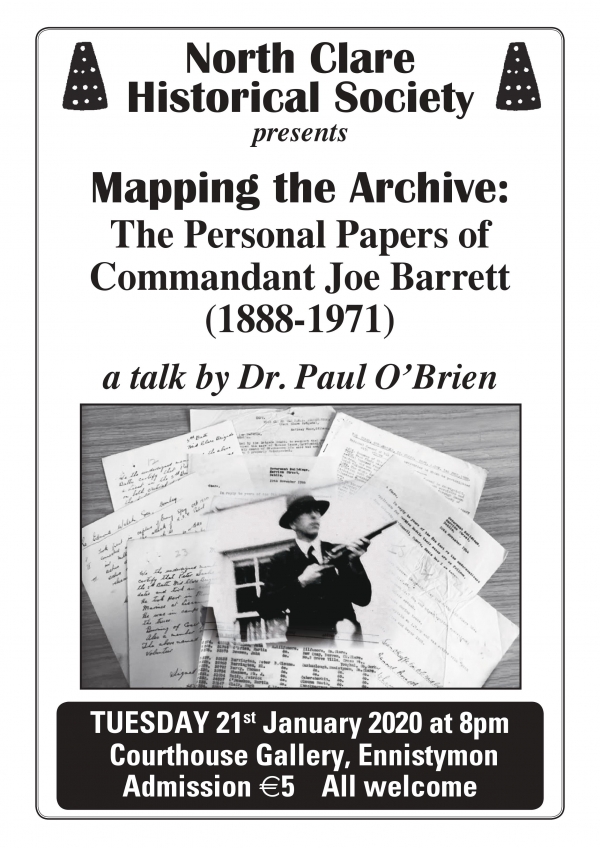 In August 2018, members of Kilrush and District Historical Society (KDHS) helped to rescue an important auctioneer’s archive. Included in the collection were several suitcases and boxes of material dating from c.1916-1950s, safely stored in the attic of the Barrett house in Moore Street, Kilrush, Co. Clare. The papers were the property of Kilrush-based Joe Barrett, who was commander of the Mid Clare Brigade of the IRA during the War of Independence and the Civil War. The Barrett family home had been sold, and Joe Sheehan, grandson of Joseph Barrett invited KDHS to view the contents of his late grandfather’s house.

The discovery of this hitherto unknown and substantial archive has shed light on the role of Barrett, his wider family and hundreds of individuals who played an active part in the War of Independence and the Civil War, in County Clare. The files document the activities of the mid-Clare Brigade during those years and beyond as they fought for their military service pensions. The highly illustrated lecture will discuss the contents of the archive, the Barrett family, tell the story of some of the individuals named in the collection while focussing on efforts to map the individuals, locations and operations mentioned in the papers. In 2015, Dr. Paul O’Brien received his doctorate from the Department of History at Mary Immaculate College, University of Limerick, where he now lectures. In 2016, he was a research fellow at Centre Culturel Irlandais, Paris (Irish College, Paris). He is a recipient of the Military Heritage Trust of Ireland award for his research into recruitment practices in the First World War.

The talk will take place in the Courthouse Gallery, Ennistymon starting at 8 pm.

In April 2019, Four Courts Press published Paul’s first book entitled: The Glynns of Kilrush, Co. Clare, 1811-1940: Family, business and politics. The book is a monograph based on his doctoral thesis.

He is currently working on a biography of Lady Victoria Pery (1893-1918), an accomplished early aviator, due to be published in early 2021. In December 2019, Paul researched and curated a major exhibition for Dunnes Stores which told the story of the Jetland Ballroom in Limerick.

Paul is a founder member of Kilrush and District Historical Society, where he serves as secretary. He is also a committee member of the Oral History Network of Ireland, the Thomond Archaeological and Historical Society and the Irish History Students Association.

back to top
More in this category: NCHS February Talk by John Egan Free Talk on Health & Yoga