The next talk in the North Clare Society’s current lecture series will take place on at 8 pm, Tuesday 25th February when John Egan will deliver a talk 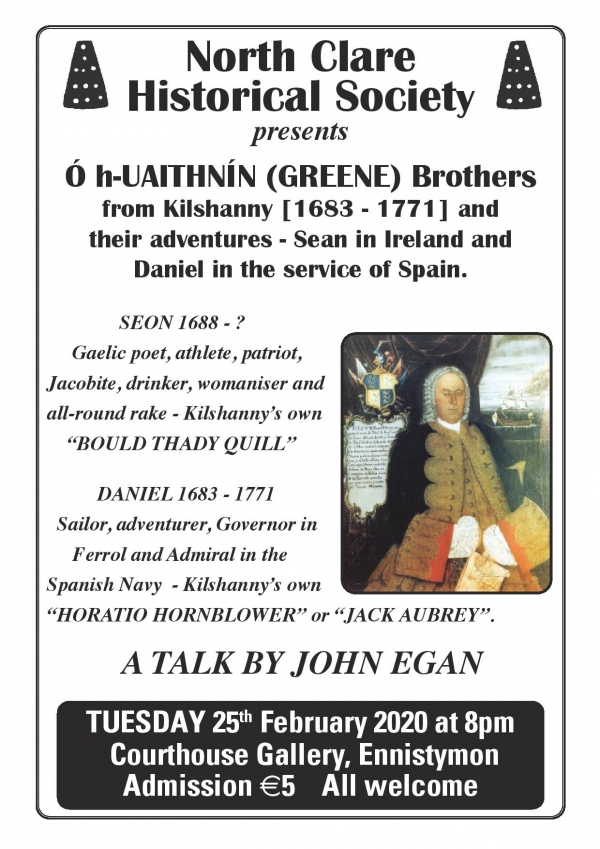 at the Courthouse Gallery & Studios, Ennistymon
All are welcome

They were sons of Walter Ó h-UAITHNÍN High Constable of Corcomroe and were born in the townland of Dereen, Kilshanny.

Seán, known as Seón, was a Gaelic poet celebrated by his contemporaries. In addition, he was noted for his athletic prowess, his patriotism, and his ardent Jacobite sympathies. But, typical of many 18th century rakes, this light-hearted man of many talents who had the affection of his friends and neighbors, was to be given to a carousing lifestyle to fully develop all his powers. But, he was, no doubt, Kilshanny's 'BOULD THADY QUILL".

Daniel began his adventurous career in the Royal Navy before transferring to the navy of Spain. He was engaged in sea battles in the Mediterranean. He escorted treasure fleets from Spanish America to Spain. He was shipwrecked while fighting pirates off Algeria. He burned his ship in South America to avoid having it captured by the British. Commanding a galleon escorting a fleet from Havana to Cadiz, he was driven 1,000 miles off course in a hurricane and washed up in the state of Maryland U.SA. Returning to Spain, he became Governor of Ferrol and was promoted to the rank of Admiral. Truly, he was Kilshanny's own "HORATIO HORNBLOWER" or "JACK AUBREY".

John Egan is from Ballyvraneen, near Ennistymon and is a graduate of NUIG in history and archaeology. He has previously given talks to the North Clare Historical Society on surviving Irish words in the language of North Clare, the story of the drafting, printing, distribution, and history of the 1916 Proclamation and the flags on the G.P.O. Last year he gave a talk to the Society on Ennistymon born, George "Kootenai Brown", who became an adventurer and conservationist in Canada.

back to top
More in this category: Parrot and Peacock NCHS Lecture Series January 2020