From FEB 16 – MARCH 7, 2013
Official opening Saturday 16th February at 4 pm
Everybody welcome and meet the artists.

The upcoming exhibition at the Courthouse Gallery, Ennistymon will show new paintings and drawings by Leonard Graham and John Cullen. Both artists work in an expressive style.

Leonard's works are very spontaneous and almost primitive in their application. He wants to simplify drawing right down to its base form. “I clear my head of any preconceived notions and let the stream of conscience flow”, he says. “What is left is a deeply buried background noise manifest onto paper.”

Leonard Graham was born in Limerick and raised in Co. Clare. He graduated from Limerick School of Art in 2000 with a degree in fine art printmaking and a higher diploma in art teaching. He has had a variety of solo and group exhibitions in Ireland, England and on-line. He also teaches art and design in Cork and is currently working on a graphic novel due in 2014. 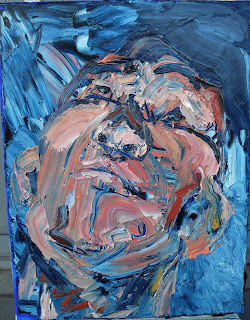 John Cullen's paintings are inspired by the distressed images of boxers’ faces.
Through use of colour, composition and surface he tries to convey emotional states – courage, fear, anger, uncertainty, humiliation etc. “As such the paintings are metaphors for the state of humanity within the context of the current economic downturn”, he says.
“They are also very much about paint, and my attempts to apply and manipulate it until the painting  takes on a life of its own, or becomes something independent.  To this end layering and the use of impasto are vital to the process.  I prefer to work on one painting at a time, giving it everything I can until it is resolved or destroyed.  It is this tightrope between resolution and destruction that is the challenge for me as an artist.”

John Cullen was born in London and is resident in Ireland since 1995.  He lives and works in Sligo. He graduated from Sligo I.T in 2009 with a degree in Fine Art. Since then he had various solo and group exhibitions in Ireland.
back to top
More in this category: Tanya Harris / Consciousness Resides in Geometry “Seeing the Burren”, an exhibition of new work by David Skinner.