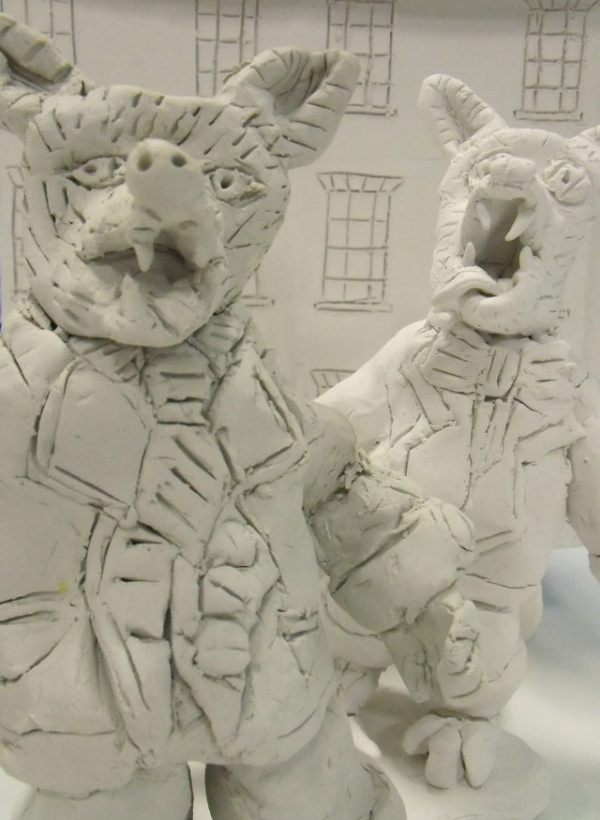 An Image in My Head marks artist Ronan Murphy’s most significant exhibition to date. His art practice spans creative writing, ceramics and print, where the apparent ordinariness of everyday life comes into question through the richness his imagery.

Here, text, print and figures in clay, who are either foxes behaving as humans or humans behaving as foxes (or both), populate clay streetscapes and other scenarios, as the world and our interactions in it are imagined in new ways.

This series of works was produced from 2018 and 2019 as part of a joint creative writing / ceramics project supported by Clare Arts Office under its Embrace Programme and the Dulick Centre, where Murphy has been honing his skills and developing a unique style since 2016. A visit to the KCAT Art and Study Centre in Kilkenny led to a meeting with KCAT’s co-founder, artist Andrew Pike, and a subsequent invitation to Pike to share this exhibition.

The portraiture of Andrew Pike also proposes new ways of looking at the face and the facades of the everyday. A well-established artist working across a variety of media including painting and animation, his work has been shown extensively in Ireland and internationally. Though best known for his paintings, Andrew has award-winning animations to his credit, and co-designed the MACNAS Big River Parade as part of Galway Arts Festival 2006. Most recently Andrew’s self-portrait (2018) has been acquired by the National Portrait Collection of Ireland at the University of Limerick.

This exhibition is possible thanks to Clare County Council, KCAT and the Dulick Centre, Ennis.

The Courthouse Gallery & Studios – Anne Mullee, This email address is being protected from spambots. You need JavaScript enabled to view it. 064 77 0630

Dulick Centre – Patrick Looney – This email address is being protected from spambots. You need JavaScript enabled to view it.

Ronan Murphy was born in Ireland but moved to London as a teenager and lived there for twenty eight years. He worked at a variety of different jobs but his artistic journey began in his late twenties, during a period of unemployment in 2002. Always an avid reader, Ronan began to write stories and illustrate them, at first with pencil and later using computer and Microsoft Paint. He has no formal art education and is a self taught Illustrator.

Returning to Ireland in late 2016 he began to attend the HSE Dulick Centre in Ennis. Through the Centre’s Ceramics Programme he discovered a talent for working with clay, and within a year was making exhibition quality work.

In 2018 Ronan was invited to exhibit at Kilkenny Arts Festival in a group show facilitated by Kilkenny Collective for Arts Talent (KCAT). Since then he has continued to develope new work in ceramics, print and writing.  His work draws inspiration from the architecture, fashion and literature of Edwardian Britain.

Andrew Pike worked as a gardener for many years in Camphill Duffcarrig, Gorey, before embarking on his artistic career. He studied art for two years in Ormonde College, Kilkenny, and became a founding member of the KCAT Studio. Andrew has exhibited extensively in Holland, France, Germany, America, Australia, and Japan.

These cultural exchanges inspire him greatly in his work. Though most well known for his paintings, Andrew has award-winning animations to his credit as well as co-designing the Macnas Big River Parade, with Sinead Fahey, in the Galway Arts Festival 2006. In 2018 Andrews work was acquired by the National Self Portrait Collection of Ireland at University of Limerick.