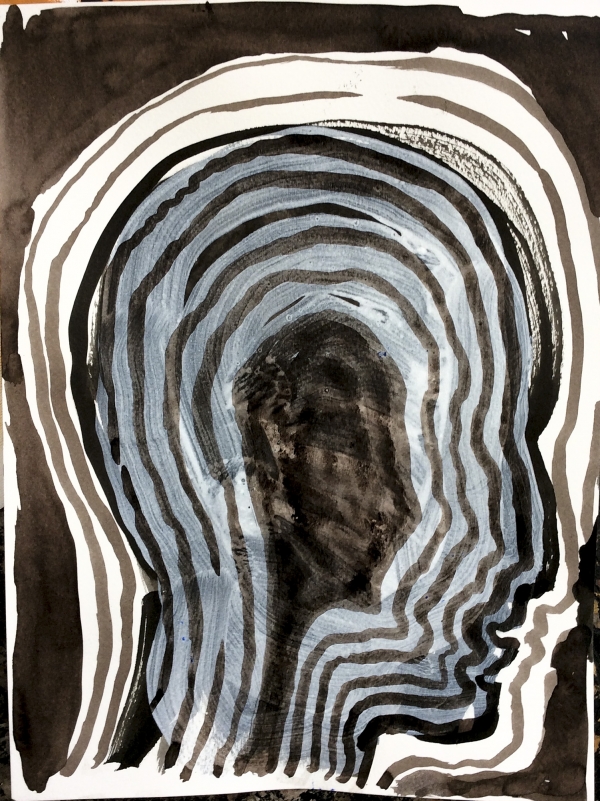 The exhibition features a series of recurring motifs related to a mysterious character presented with difficult routes through hills and mountains.

Multiple choices and wrong paths. The drawings spin out in myriad directions of allusion, metaphor and technique. The project attempts to navigate a treacherous and slippery path via figurative painting, landscape and surrealist approaches to image making.

The process of making, where each thing leads to the next through an experimental and intuitive approach is at the core of this work.

Stephen Dunne’s work operates across the registers of painting, drawing, moving image and the investigation of speculative and theoretical fictions. Works are produced in a spontaneous manner and attempt to draw upon the unconscious as a source material. A graduate of the M.A in Fine Art painting at the Royal College of Art in London, and of the National College of Art and Design, Dublin. Stephen has returned as a visiting lecturer at the R.C.A alongside his continued painting practice.

Recent and current exhibitions include 'Uchronia. Not as It Was But as It Might Have Been' at the RHA Ashford (2019) and 'Shackled to Belligerent Ghosts' at Triskel, Cork (4th April - 31st May).

Past exhibitions have included a number of solo shows “Luminous” at NAG, Dublin, 2015; “Poached Eyes on Ghost & Corpse of Milk”, Fumbally Exchange, Dublin 2015; “Subliminal Anarchy”, Pallas Projects, 2014 and a series of solo shows at Rise in Berlin “The Phantom Limb”, 2011; “Schizo Epiphanies”, 2009 and “De Zauberlehrling” (The Sorcerer’s Apprentice)”, 2008. Alongside ongoing collaborative projects with UK artists John Strutton and Mark Titchner. Other exhibitions have included “Toot Tootsie Goodbye” at V1 Copenhagen curated by Francesca Gavin, group shows at Domobaal London, GSK Contemporary at the Royal Academy in London (with Mark Titchner) and The Big Four at Channel Four in London. Stephen was also included in “Pilot 3” which was exhibited as part of the Venice Biennale in 2007.

back to top
More in this category: Born from the Soil / Giulia Canevari Legacy / Matthew Mitchell