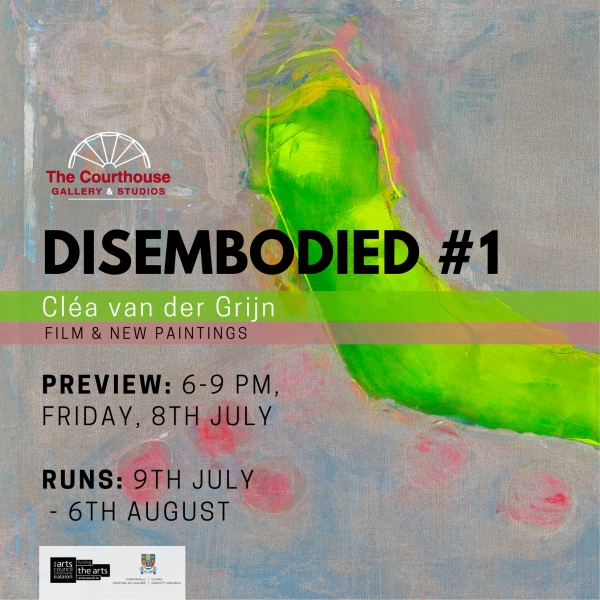 The Courthouse Gallery & Studio is pleased to present an exhibition of new work including the new film, FLUX and a selection of new paintings by artist Cléa van der Grijn opening on Friday, 8th of July from 6 to 9 pm. The exhibition will run from the 9th of July - 6th of August 2022. All welcome, free entry.

Cléa van der Grijn is a visual artist, filmmaker and writer based in Sligo. She employs various media in her practice, including site-specific installation, experimental film, large format photography, sculpture, drawing and painting. Disembodied #1 has been produced around the presentation of her new award-winning feature film, FLUX, 2021, 16 mins 44 sec, which will be exhibited along with her recent film, Jump, 2018, 26 min 39 sec and Reconstructing Memory, 2016, 6 min 22 sec.

Since 2008 van der Grijn has been working on the subject of death. Her practice deals with unravelling the complexities associated around the culture of death and reconstructed memory, researching the myth of repressed memory, re-imagining and process all become part her narrative, understanding the rational, social and emotional circumstances that become constructed around memory and time. RECONSTRUCTED MEMORY (2016). The process of her studio practice is multifaceted. This is demonstrated through painting, film, installation, sculpture, audio and writing, which all deal with the reconstruction of time + memory. Fact and fiction. A construct rather than a deconstruct.

Introduction to the exhibition and artist:

I first encountered Cléa van der Grijn’s work as The Shinnors Scholar in Limerick City Gallery of Art (LCGA) in June 2017 with her exhibition and film “Reconstructing Memory”. The exhibition was the culmination of a body of new work that investigated the Irish and Mexican cultural responses to death and loss exploring the disparities and similarities between our respective cultural responses to death.

Van der Grijn’s approach to artmaking is evocative, emotional, and cleverly concerned with material and space. Reconstructing Memory drew my attention in particular due to the fascinating process of research and development by van der Grijn, visiting and engaging directly with people and exploring the individual as well as the community. The exhibition particularly intrigued me as a young(er) curator as it bordered on similar fascinations I had at the time around shared social relationships, ritual activities and the sharing of our personal experiences, responses and journeys.

As I reflect on Reconstructing Memory, I reflect back to a period before I had experienced any direct loss in my life, looking back now the exhibition almost intensifies in my memory and I experience it in a new way with a deeper understanding of the care and skill employed by the artist in introducing and discussing such a deeply important part of life. Death and loss are universal, they are perhaps the biggest universal unifier of humanity and in particular, in 2022 we have all experienced them on a global scale in one way or another through the loss of a loved one or through the intense experience of isolation and fear which heavily impacted all of our mental health.

Along with Reconstructing Memory, 2016, 6 min 22 sec, Jump, 2018, 26 min 39 sec and her new film FLUX, 2021, 16 mins 44 sec, will be on display in her new exhibition Disembodied #1 at The Courthouse Gallery & Studios. The exhibition, for me as the curator, brought the challenge of presenting three films and paintings in a single space. Van der Grijn had exhibited Jump in January 2019 before I joined as curator and utilised a built viewing room so I was keen to create a new kind of space which would imbue the work and the ideas across the space in a new way and provide viewers with a completely new experience, both in content and in spatial movement.

I invited van der Grijn to exhibit as part of the 2022 programme which sought to bring to the forefront a discussion on loss, grieving, our wider extended family relationships, and the cultural legacies and connections which form the contemporary self. In a society in Ireland now as we come out of a global pandemic which had hit us all, both physically and mentally, I believe an open and free discussion of these experiences is vital to our shared well-being.

As we begin to emerge from one of the defining moments in our shared global histories, The Courthouse Gallery & Studios will take this opportunity to open up a dialogue to reflect on what has formed and what will form the new contemporary self at this moment. The programme brings together artists working with elements of Irish and global cultural traditions, conventional and new processes of grieving and recognising feelings of loss and celebration of life. Through the programme, The Courthouse will facilitate a dialogue through our relationships with the people and traditions that make us who we are and that will continue to shape us in the years to come.

The 2022 programme is a response to our inherited selves, our grown and lived selves and the connections and elements within our shared ecologies which form the now and shape our collective futures. Elements of the natural environment, explorations of the outer and inner spheres, ideas of myth-making, new technologies. van der Grijn's exhibition has been selected to contribute her unique voice, process and history with mental health and shared social interest in our inner open self which provided an important opportunity to open the programme's dialogue to the community. van der Grijn's work is an important exploration of ideas and media, forming her films from an artistic point of view; they inhabit the space of artwork and film in the traditional sense. The quality and production are incredibly high and as you watch through the relatively short films you begin to see how her process of painting and object making influence the films and vice versa, every element considered and supporting the formation of the next.

The paintings, while not immediately directly related to the films, themselves form around the same ideas of the inner self, mental health, cultural traditions, story-telling, the weight of social obligations, and pressures and much more can be read from them by the somewhat subtle insertion of the figure. The work can be read in many different ways by each individual but at the core of the work, in my opinion, is a real concern for the emotional self and the working through of our inner emotional concerns, insecurities and societal pressures.

In my opinion, the work explores humanity, much in the way my curatorial practice is deeply steeped in a fascination with humanity, the good and the bad. van der Grijn's work is so rooted in hers and our humanity, her experiences and life as a whole that it can't help but speak to people on a multitude of levels and impact viewers in unexpected ways both visceral and almost therapeutically.

"FLUX" was the starting point for the presentation of the exhibition and the artist's newest film created in 2021. I was excited to see the trailer before it was publicly released and as I watched it, I was drawn in by the sound score and cinematography as I watched the figure move around the home, and walk around the landscape. The film trailer ends with another figure screaming, there was a familiarity for me in the sense of atmosphere and feelings to the past year (at the time) of social isolation and confinement to the home and the immediate landscape around us. The fact Flux was filmed entirely using only available light and the full moon adds a very clever element to the new film work and immediately brings us to notions of mental health with the common literary trope that a full moon can incite emotions, provoke behaviour, and even cause physical illness, a belief strongly held by many.

Flux "film explores themes of death, loss, love, isolation and mental fragility using literal and abstract imagery. The film’s creative use of editing compacts ideas of time and space, and invites us into dreamscapes and mindscapes that emphasise the characters’ emotional lives. With sounds design incorporating Irish Sean Nós song, this film blurs the boundary between reality and imagination"

In Mexico death is commemorated by two significant holidays: ‘Día de los Muertosa’ (Day of the Dead), a colourful day of carnival, and ‘Día de los Santos Inocentes’ (Day of the Innocents), a more somber day when deceased children are remembered. It is this ‘Day of the Innocents’ that van der Grijn personified in the short film Reconstructing Memory. In Mexican cultures there exists the belief that the after-life is a vivid life of its own. We see a young girl idling down a dirt road until she reaches the grave yard. Alive or dead?

JUMP is about understanding the rational, social and emotional circumstances constructed around time and memory. A woman stands at the edge of a pier. She wilfully jumps. Slowly she falls through water where time catches her breath. What are the memories between the transitional period of

jumping + hitting the water when life becomes momentarily suspended. Alive not dead. What memories would be placed to validate existence. Memories to record. Real or perceived? Fact or fiction?

Made using only available light and the full moon, this film explores themes of death, loss, love, isolation and mental fragility using literal and abstract imagery. FLUX compacts ideas of time and space, inviting the viewer into dream and mindscapes which emphasise the characters’ emotional lives. Incorporating Irish Sean Nós song, FLUX blurs the boundary between reality and imagination.

FLUX supported by Culture Ireland + The Arts Council of Ireland 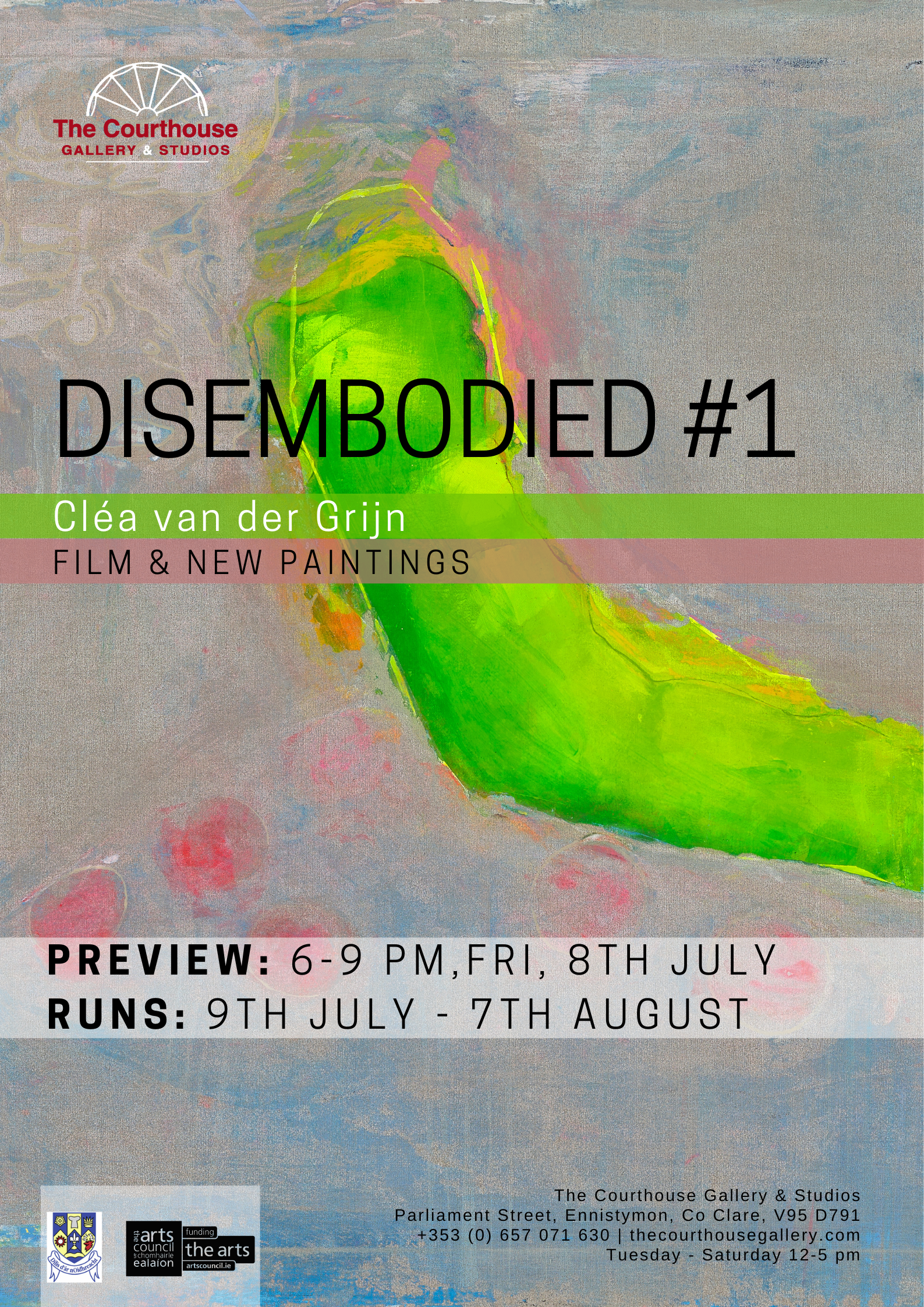 back to top
More in this category: Chrysalis; Annual QQI Exhibition It Comes in Waves