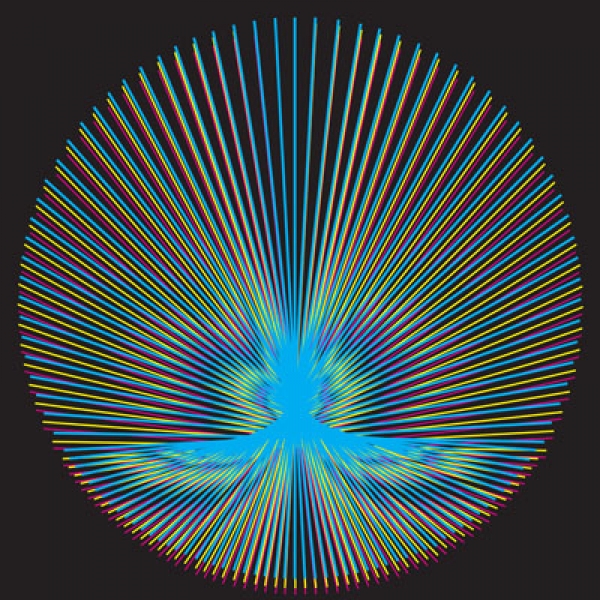 This is Harris’ first major solo exhibition in Ireland, where she has been based since completing an MA in Textile Futures at Central St Martins (London) in 2013.

Using mixed media including sound, textiles, drawing, installation, unseen performance, and plant extracts, this new body of work investigates the relationship between the vibrational energies of plants, sound and geometry. Harris interprets the sound vibrations of Irish native plants frequently associated with healing, which she visualises with the assistance of a cymatics machine, a device that allows minute sound vibrations to be seen through another medium, such as water.

Her performative work has seen her embark on a series of ritualistic ‘plant diets’, drawing on the religious practice of the Shipibo tribe in the Peruvian Amazon Jungle, where she underwent a self-motivated residency with the tribe in 2014. The Shipibo practice a ritual where songs are composed while undertaking a ceremony involving consuming specific plants. The songs are later translated into colourful geometric tapestries. A typical ceremony involves cleansing the body and then fasting for a period of time, whilst regularly ingesting a concoction of the chosen plant, with the aim of understanding its healing properties. Participating in this rite has had a great impact on Harris’ creative practice.

For this new body of work Harris has worked local herbalist Carole Guyette to experiment with her own plant diets, using the Elder, Blackberry, Blackthorn, and Dog Rose growing around her house in rural Clare.

A key work in her exhibition is the immersive ambisonic installation, which recalls a dream Harris had during a Shipibo ceremony in Peru. Visitors enter the space alone, and are immersed in a soundscape of plant sounds, surrounded by artifacts and images devised by the artist.

In the main gallery her textile works, drawings, and objects relating to her personal plant diet ceremonies, narrate the performative aspect of the work undertaken. The works illustrate the complex geometric compositions revealed through Harris’ use of cymatic interpretation of each plant’s sound vibrations.

“The Shipibo are in harmony with the natural world around them,” Harris explains. “Everything is emitting and absorbing electromagnetic vibrations and consciousness communicates through these vibrations. These vibrations weave energetic living geometries – ever-moving patterns within patterns – which flow through everything in nature and our perceptions of reality,”

Tanya Harris is a multidisciplinary visual artist based in Co. Clare. Since graduating from an MA in Textile Futures, Central Saint Martins, London, 2013, she has been working in the medium of sound, collage, printmaking, film and textiles.

back to top
More in this category: Out of Place / CeA/R/T Place & Movement - Young Curators Project