The Courthouse Gallery & Studios is delighted to welcome artist Cléa van der Grijn with her exhibition JUMP, which opens at 7.30pm on Friday 18th January 2019 and runs until 23rd February. 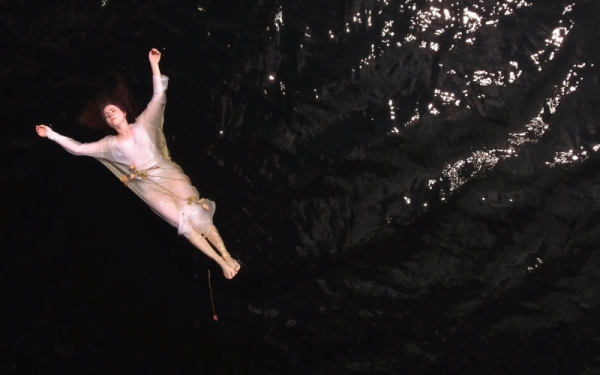 Since 2008, Cléa van der Grijn’s work and practice is about unravelling the complexities associated around the culture of death, reconstructed memory and time. Memories real or imagined. Dream.

JUMP is a newly commissioned body of work about understanding the rational, social and emotional circumstances constructed around time and memory. The exhibition consists of a series of new paintings by Cléa as well as an ambitious film work written and directed by Cléa and created with collaborators; Joseph P. Hunt, Michael Cummins and Ciaran Carty.

A woman stands at the edge of a pier. She wilfully jumps. Slowly she falls through water where time catches her breath. What are the memories between the transitional period of jumping + hitting the water when life becomes momentarily suspended. Alive not dead. What memories would be placed to validate existence. Memories to record. Real or perceived? Fact or fiction?

Commissioned by Mermaid Arts Centre in partnership with five venues and funded through an Arts Council of Ireland Touring Award JUMP has toured to:

It will continue its journey around Ireland throughout 2019:

Cléa van der Grijn studied Fine Art in the National College of Ireland and now lives and works in Sligo. In 2015, Cléa had a 4 month residency in Mexico which marked major turning point in her practice. She created a large scale experimental installation called Reconstructing Memory, which was exhibited in The Model Sligo (2015), Limerick City Gallery of Art, Limerick, Rochester Arts Centre USA and The Solomon, Dublin. (2016).

RM was a multifaceted textured exploration of the societal disparities in approaches to death in Mexican and Irish cultures. Film, photography, sculpture, painting and installation were all sensitively utilised in a rich, beautiful and considered exhibition. This new body of work JUMP to be exhibited in five venues around the county is the natural extension of her practice further exploring social and emotional constructs around loss, death and memory.

This exhibition is possible thanks to the Arts Council Touring Award

back to top
More in this category: Tanya Harris / Consciousness Resides in Geometry Brought To You Despite… / Sadhbh Gaston