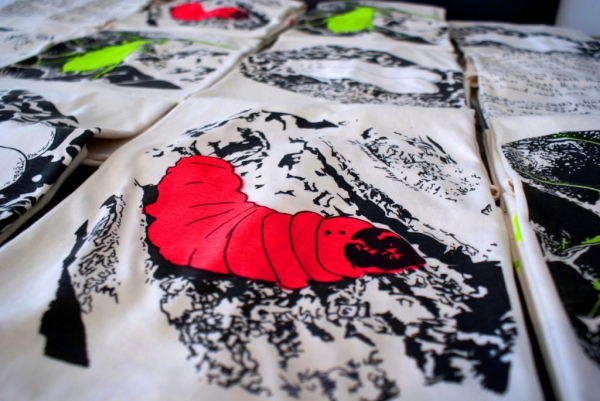 Using mixed media including screen printing, stitching and embroidery, Gaston’s approach encompasses careful planning and precise execution to make works that scrutinise contemporary and ancient aspects of clothing and food – items that can come and go quickly in our daily lives.

Her series Grain 1-4, was commissioned by Teagasc for CERERE, an EU initiative investigating the role of heritage grins in modern society. With these pieces she examined the lack of information we have on these grains, breaking down expanded images of grains no longer commonly grown, including Donegal oat and rye, into 3D ‘pixels’ cross stitched onto linen. The resulting images further blur our knowledge of these grains, questioning how much we know about how they were grown and used by our forebears.

The use of science to influence mass-agriculture is the focus of the eponymous series of Brought to You Despite…, where illustrations of pink bollworm and white fly, pests that threaten cotton production, are magnified to a huge scale and printed on the final product produced by the crop. The journey of the cotton cloth, so careful nurtured by the farmer – at a potential cost to our environment – is one that can ultimately result in a ‘fast fashion’ garment little valued by its wearer.

Gaston’s interest in scientific approaches to farming, its affects on ecology and the risks to the human consumer, are writ large in these contemplative, tactile, works.

Sadhbh Gaston is an emerging artist from Co Clare, currently living and working in Cork City. A member of Sample Studios, Gaston initially studied International Development and Food Policy at University College Cork, before switching to Contemporary Applied Art at CCAD (2016). Growing up in the Burren fostered her interest in agriculture and the politics of production, informing her research into globalisation and its relationship to rural life. She was an exhibiting artist in Tulca Festival of Visual Art (Galway, 2018) and was commissioned by Teagasc to produce a series of work for CERERE, a consortium of 13 partner countries researching aspects of cereal food systems across Europe.

back to top
More in this category: Tanya Harris / Consciousness Resides in Geometry NO BOUNDARIES and EXPLANATIONS Official Launch on Aug 7th 2010 at 5pm by Noel Crowley