Join us for The Courthouse Gallery's first Summer Exhibition, featuring selected work from over 60 artists, opening at 6.30 pm on Saturday 20th July

Place & Movement was the exhibition created by the participants of the Young Curators Project, and drew from the Clare County Council Art collection.

The project was funded by an Arts Council Young Ensembles Grant (2017) and the exhibition was opened by Clare Arts Officer Siobhán Mulcahy at 6.30pm on Thursday 18th January, and ran from 19th January – 24th February 2018.

Matthew Mitchell is a fine artist painter based in Co Clare and Dublin. He draws his materials from the local environment, incorporating its fabric into his work.  (Until 6th July)

The Courthouse Gallery & Studios is delighted to welcome artist Cléa van der Grijn with her exhibition JUMP, which opens at 7.30pm on Friday 18th January 2019 and runs until 23rd February.

Trasna 8 marks the final chapter (for now) in The Courthouse Gallery’s annual open submission of small works, where all work is accepted and exhibited.

Picking up the Threads:Remaking the Fabric of Care - The Elephant Collective

Do You Care For Tea / Noel Molloy 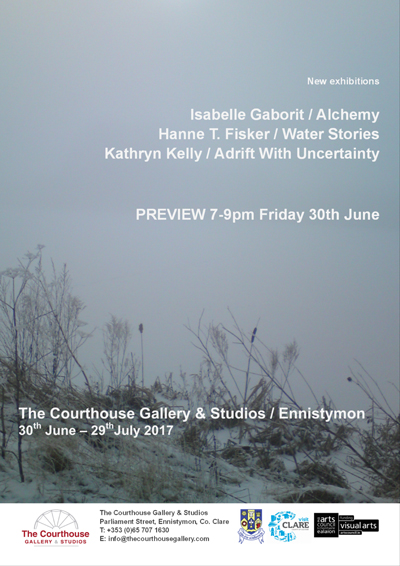 Please join us between 7-9pm on Friday 30th June for the opening of our new exhibitions:

Entering Other Territories was a month long project held in October 2016 including an evolving exhibition, workspace, and Public Engagement Programme (see Public Programme list of activities below), created by Maeve Collins and a collection of creatives.

Josephine Quigley is a native of Glasson, Athlone where her childhood summers were spent at her Grandparents’ home in Inchmore off the shores of Lough Ree. This picturesque and idyllic Island was Josephine’s rich source of inspiration and first introduction to explore Nature and Beauty. These early memories would never leave her. 28 - October 28 2016

This exhibition presents works created over a four-year period, as part of practice-based PhD research at The European Centre for Photographic Research, Newport.

The Space Between by Sarah Fuller and Maria Kerin

This exhibition presents a film installation, ‘Other Possibilities’ in the main gallery by Sarah Fuller, and a series of presentation-performances, ‘Actualities’ by Maria Kerin. July 15th -  August 11th 2016

Above the Clouds by Sven-Erik Stamberg

RED COUCH SPACE July 15th - August 11th
'I live and work in the small borough Viimsi in Estonia. Since 1997 I have been exhibiting my work in a number of group and solo exhibitions in Estonia, Finland, Latvia, USA and Ireland. Exhibition "Above the Clouds" consists of giclee prints from my new collage series. Before materialisation all combats and battles are held on the idea level or so to speak, above the clouds or in the spirit.' Sven-Erik Stamberg.

and we sense something
always afterwards,
when it echoes back
out of our memory,
an enduring murmur and
in the thicket
the smell of longing

Opening 11th June at 8pm in the Courthouse Gallery.

The exhibition runs from June 11 - July 7

I HAD A DREAM by MrsRedhead

MrsRedhead grew up in Poland, surrounded by lush forests that initiated her love of folklore and fantasy. Moving to Ireland 13 years ago was the opportunity to bring to life the fairy tales.

Irish legends have always inspired her and she found a way to show surrealism and exploration into the human soul. MrsRedhead holds a Masters degree in Pedagogy from Poland, which made her learn to better understand feelings and hidden thoughts, so in this way her photography is often a means of self- expression.

“I ask people about their dreams and try to peek into their soul and explore their individual personalities”, she says, “this helps me choose unique locations perfectly. My recent work is an in depth journey into the mystical locations I have found on this spell-bounding Island.

In my own imagination, every abandoned place is an unexplained world that has a lost soul and a story that begs to be told. I want to awaken it, bring it to life, give it a reason to breathe and inspire again, through the lens of my camera”.

A new series of paintings based on famous portraits and self-portraits by well known artists re-imagined as animals.

The works in this exhibition are primarily acrylic on canvas.

Alan does also interior murals and some illustration work.

Originally from Ennis, Co. Clare but now based near Carrick-on-Suir in Co. Tipperary. He graduated from Limerick School of Art & Design in 1999 with a First Class Honours Degree in Fine Art (Painting).

As well as taking part in numerous group shows, his most recent solo show was in the South Tipperary Arts Centre in 2015.

And Still There Are Secrets Photography Narratives by Patricia Delker