In the gallery  4th May 8pm   a concert, small talk and show of a short 9 minute film.
North Indian Classical Music and the Foreign Phenomenon
:Musical conversations 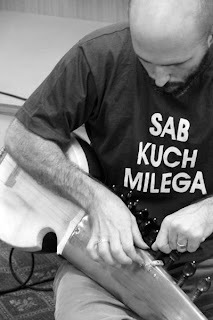 This event explores the unique experiences of foreigners undertaking serious study of North Indian Classical Music.  Beginning with a discussion by Australian born Mattu Noone, who is a long time student of the North Indian 25 stringed lute called the sarode, this evening will give the audience an insight not only of the music of but the physical, emotional and mental challenges of it's discipline.  Dara O' Brien, a based sitar player, will also present ideas from his recent PHD material on the spiritual beliefs of North Indian musicians.  A short film entitled, We are Nocturnal Animals, will be presented which outlines the experience of the concert season in Kolkata, . 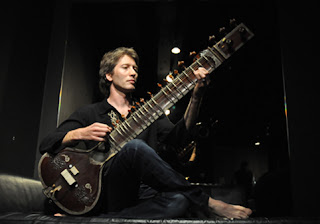 Finally, Mattu, Dara and tabla player, Sadanand Magee, will present a recital of North Indian instrumental music.  This item will be a jugal bundi or conversation between sarode and sitar.
back to top